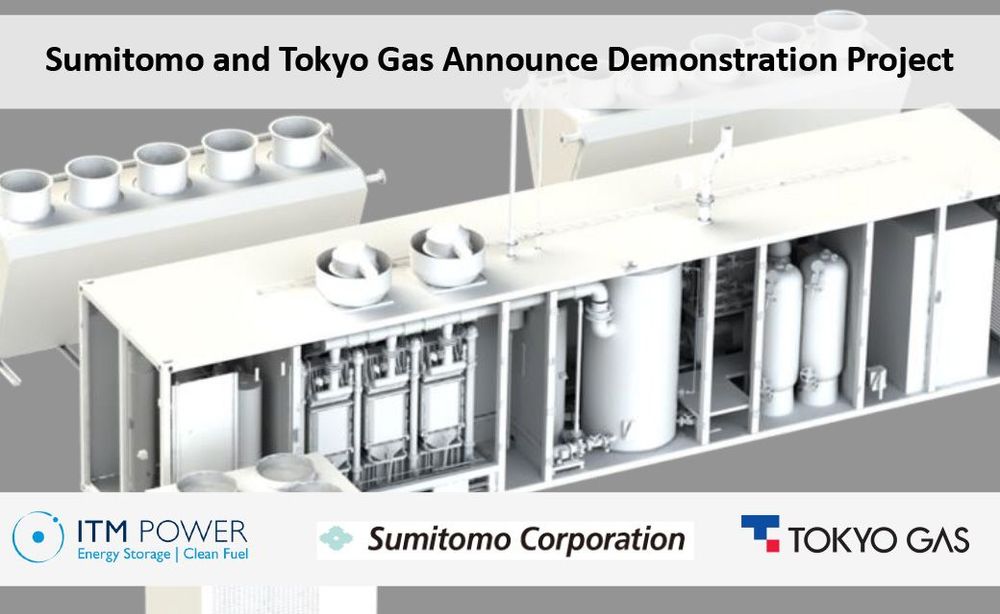 ITM Power (AIM: ITM), the energy storage and clean fuel company, notes the announcement made today in Tokyo by Sumitomo Corporation (“Sumitomo”) and Tokyo Gas Co., Ltd (“Tokyo Gas”) concerning the deployment of a 2.0 MW electrolyser sale to Sumitomo (increased from 1.4 MW) previously announced on 18 March 2021. The full text of the Sumitomo and Tokyo Gas announcement is set out below.

The Government of Japan has set a goal of achieving carbon neutrality by 2050, and aims to supply more than 420,000 tons of clean hydrogen*1 per year. Hydrogen produced by water electrolysers using electricity derived from renewable sources of energy is considered to be green hydrogen and a trump card for carbon-free societies in that no CO2 emissions are produced during its production process. Furthermore, the upscaling of water electrolysers is attracting worldwide attention as players aim to reduce green hydrogen production costs and boost efficiencies.

*1 A collective term that refers to green hydrogen, or hydrogen with a CO2 emission-free life cycle, and blue hydrogen, or CO2 recovered and utilized from manufacturing processes that use fossil fuels.

“Sumitomo Corporation entered into a strategic partnership with ITM Power in 2018 and has been working to introduce the company’s solid polymer water electrolyser into the Japanese market. ITM Power's advanced and cost-competitive electrolysis technology is set to drive green hydrogen production projects in Japan that use large electrolysers. At Sumitomo Corporation, we will continue to accelerate our efforts to build a hydrogen-based society with the aim of achieving carbon neutrality in 2050 and realizing sustainable energy cycles.”

“At the Tokyo Gas Group, we are strengthening our technological development for decarbonizing gas-state sources of energy in order to fulfil our ‘Challenge to Achieve Net Zero CO2’ that we set forth in our management vision ‘Compass 2030.’ Through this demonstration, we will accumulate operational know-how on large water electrolysers, accelerate their social implementation in combination with the development of direct hydrogen utilization and methanation technologies, and contribute to achieving the government's goal of ‘realizing a carbon-neutral, decarbonized society by 2050.’”

“It is an honour for us to deploy our first electrolyser in Japan with Tokyo Gas. Together with our partner Sumitomo Corporation, we are looking forward to demonstrating how PEM electrolysers can make a major contribution to decarbonising industry and energy in Japan. This megawatt scale product at the laboratory of such a prestigious customer will help us to become better known in the key Japanese market.”