The Trials and Tribulations of Transporting Green Hydrogen 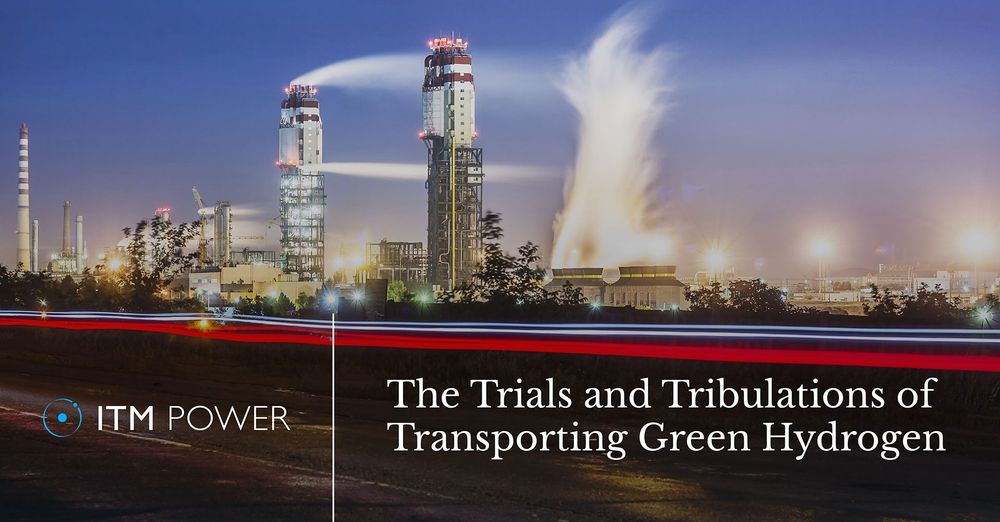 Announced back in 2020, the European Union’s ‘Hydrogen Strategy’ laid down the gauntlet for green hydrogen. Through a mix of mobilising support and stimulating investment, it aims to build a full-fledged hydrogen ecosystem from 2025. While scaling up the production of electrolyser systems is paramount, the importance of how green hydrogen will be transported cannot be overstated.

According to the ‘Hydrogen transportation | The key to unlocking the clean hydrogen economy’ report from management consultancy, Roland Berger, most hydrogen produced in Europe is done so on-site owing to cost and logistics reasons. If sufficient amounts of clean hydrogen cannot be produced onsite – or if production costs are great than 4 EURO per kg – it claims that transporting hydrogen could be the preferred option. So, what are those options?

A paper co-authored by ENTSOG, GIE and Hydrogen Europe states that as well as by pipeline, hydrogen is currently transported via marine terminals, shipped in gaseous or liquid form, via liquid or gaseous hydrogen carriers, or by rail where it can be carried out in gaseous hydrogen carriers using compressed gas cylinders via tube trailers or as a liquid in specialised containers. The paper goes on to state that the competitiveness of the different delivery options will depend on the distance, and on scale and end use. If hydrogen needs to be shipped overseas, for example, it generally has to be liquefied or transported as ammonia or in Liquid organic hydrogen carriers (LOHCs). For distances below 1,500km, transporting hydrogen as a gas via pipeline is “generally the cheapest delivery option”; above 1,500km, shipping hydrogen as ammonia or an LOHC may be more cost-effective, it said, citing data from the International Energy Agency’s ‘The Future of hydrogen – Seizing today’s opportunities’ report. Yet in order to develop a hydrogen ecosystem to maturity, transportation will need to scale up, whilst also embracing novel solutions.

Natural gas pipelines have been touted as a solution. By utilising exiting infrastructure, it can repurpose rather than start from scratch, ensuring that initial start-up costs of a hydrogen pipeline network are reduced. To that end, there have been studies exploring the feasibility of blending hydrogen into the natural gas network including in France, Australia, and Italy, as well as in the UK (read more about our pioneering work on this project). Although the focus here was on decarbonising domestic heating, the studies provided evidence on the validity of using these networks.

However, owing to the molecular size of hydrogen verses natural gas, and the fact that hydrogen is 11x lighter than air, leakage in pipes has been flagged up as a “potential risk” for the hydron economy. According to a recent study from the Centre on Global Energy Policy at Columbia University, New York, “A high-risk scenario based on hydrogen demand from the International Energy Agency net-zero scenario (528Mt by 2050) could potentially lead to a 5.6% economy-wide leakage rate, compared with an estimated 2.7% in 2020.” A safety assessment undertaken in the UK as part of the government-backed Hy4Heat innovation project found that “with some relatively small changes to the gas pipes used to transport hydrogen from the gas grid into a home, hydrogen can be as safe as the natural gas-based system we use today.”

A solution that has emerged as an increasingly viable transportation option is utilising novel hydrogen carriers, which store hydrogen in some other chemical state rather than as free hydrogen molecules before transportation. Metal hydrides, carbon or other nanostructures, and reversible hydrocarbons or other liquids, have all been flagged up as potential carriers – and are all currently in the early stages of research.

Of all of these potential carriers, it’s reversable hydrocarbons that likely holds the key to unlocking widespread transportation. Of those reversible hydrocarbons, ammonia has “proven itself as a carbon free and sustainable candidate” for green hydrogen transportation, according to the European Commission. It can be converted into ammonia, transported, then turned back into hydrogen when delivered. Ammonia is easy to liquify and has a high volumetric hydrogen density of 10.7 kg H2 /100L. Moreover, it is already transported all over the world via railway, road, and pipeline. Like the natural gas network, this existing infrastructure can be utilised to transport green hydrogen thereby separating the point of production and the point of use.

As the sector with the largest demand for industrial hydrogen, ammonia is already attracting major decarbonisation projects. Following the conclusion of a feasibility study earlier this year, Project TANGO – which comprises a consortium of organisations including Linde and the Port of Rotterdam (operator of the largest energy port in Europe) – is now embarking on conceptual studies on production and logistics capabilities to develop the green hydrogen corridor from Chile to Europe. The aim is to transport green hydrogen en masse by converting it into green ammonia. An initial delivery of 172,000 tonnes per annum is currently slated to begin in 2027, with a second production phase of 430,000 tonnes per annum slated.

At present, electrolyser facilities are built where they are requited – such as a refinery or an ammonia production plant – with the green hydrogen produced used on-site. However, with a robust transportation network, electrolysis plants could also be built in areas where there are ample renewable sources and then transported to where they are required. If, as the EU intends, we are to realise a full-fledged hydrogen ecosystem from 2025, then a widespread and reliable transportation network will have to be put in place within the next few years. By utilising the tools at our disposable – such as existing pipeline infrastructure and reversible hydrocarbons – we could be well on track.

To learn more about green hydrogen and its role in reaching net zero, click or tap here.