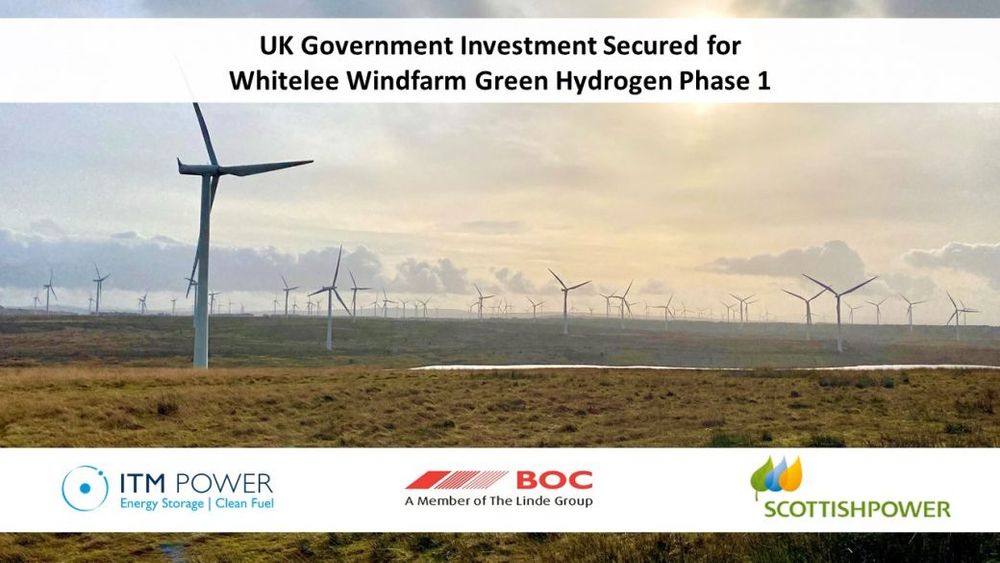 22 November 2021 ITM Power plc (“ITM Power” or the “Company”) UK Government Investment Secured for Whitelee Windfarm Green Hydrogen Phase 1 The Green Hydrogen for Scotland Consortium is pleased to announce that it has been successful in its application for funding from the Energy Innovation Portfolio competition run by the UK Government Department of Business Energy Innovation and Skills (BEIS).

The Green Hydrogen for Scotland Consortium is pleased to announce that it has been successful in its application for funding from the Energy Innovation Portfolio competition run by the UK Government Department of Business Energy Innovation and Skills (BEIS). The Energy Innovation Portfolio funding of £9.4m will support investment for the first Phase of development for ScottishPower’s 20MW Whitelee Windfarm hydrogen production and storage facility. The Green Hydrogen for Scotland Consortium partners are ScottishPower, BOC and ITM Power.

The Energy Innovation Portfolio funding is for a 10MW electrolyser and associated four tonnes of storage, and is the first phase in the development of the 20MW facility, for which a planning application was submitted on 12 April 2021, to be sited at Whitelee Wind Farm near Glasgow, the UK’s largest onshore wind farm. The project forms part of the recently announced contracts backlog (in negotiation) for ITM Power.

The project is designed to provide carbon-free transport and clean air for communities across the city and wider central belt region, with Glasgow aiming to become the first net-zero city in the UK by 2030. The facility aims to supply hydrogen to the commercial market by the end of 2023.

The funding support marks an important step for the creation of commercial-scale green hydrogen production which will ensure transportation and industrial sectors can access zero-emission hydrogen in the transition away from fossil fuels. By using renewable electricity and water as inputs to the hydrogen production process, this clean, green form of hydrogen will be critical in reducing carbon dioxide and greenhouse gas emissions across the economy.

Commenting on the award, Graham Cooley, CEO, said: “We are very pleased to be a partner in Green Hydrogen for Scotland and this first project, Green Hydrogen for Glasgow, will see the deployment of the largest electrolyser to date in the UK.”

Barry Carruthers, ScottishPower Hydrogen Director, said: “Now COP26 has ended, we need to continue to move forward, taking action to invest in the clean, green energy the UK needs to reach Net Zero. As Principal Partner for the conference we welcome this investment in a blend of renewable electricity generation and green hydrogen production promises to highlight the multiple ways in which society can decarbonise by using these technologies here and now.”

Jim Mercer, Business President, BOC UK & Ireland said: "The Green Hydrogen for Glasgow project is both innovative and exciting. It will help to shape the future of energy storage and demonstrate the value of hydrogen to Scotland’s growing low-carbon economy. This project will accelerate development across multiple disciplines – from production and storage, to transportation and end use."

ITM manufactures integrated hydrogen energy solutions for grid balancing, energy storage and the production of renewable hydrogen for transport, renewable heat and chemicals. ITM Power plc was admitted to the AIM market of the London Stock Exchange in 2004. In October 2019, the Company announced the completion of a £58.8m fundraising, including an investment by Linde of £38m, together with the formation of a joint venture to deliver renewable hydrogen to large-scale industrial projects worldwide. In November 2020, ITM Power completed a £172m fundraising, including a £30m investment by Snam, one of the world’s leading energy infrastructure operators. In January 2021, the Company received an order for the world’s then largest PEM electrolyser of 24MW from Linde. In October 2021, the Company, with Linde, announced the deployment of a 100MW electrolyser at Shell's Rhineland refinery, following the start-up of an initial 10MW facility at the site.

ITM Power operates from the world's largest electrolyser factory in Sheffield with a capacity of 1GW (1,000MW) per annum, with the announced intention to build a second UK Gigafactory in Sheffield with a capacity of 1.5GW expected to be fully operational by the end of 2023. The Group’s first international facility, expected to have a capacity of 2.5GW per annum, is intended to be operational by the end of 2024, bringing total Group capacity to 5GW per annum. Customers and partners include Sumitomo, Ørsted, Phillips 66, Scottish Power, Siemens Gamesa, Cadent, Northern Gas Networks, Gasunie, RWE, Engie, GNVert, National Express, Toyota, Hyundai and Anglo American among others.