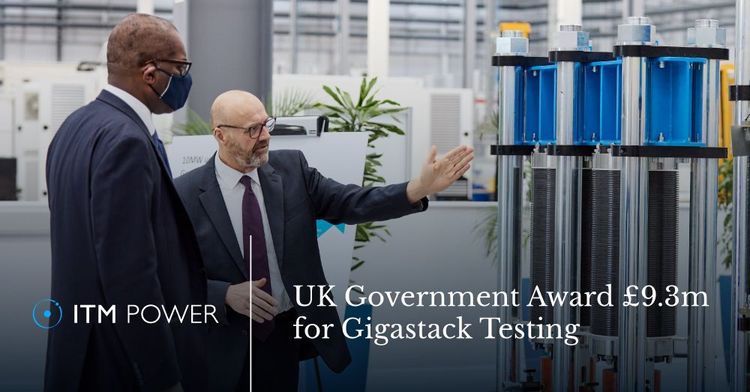 ITM Power, the energy storage and clean fuel company, announces that the Company has been awarded a contract by The Department for Business, Energy and Industrial Strategy (BEIS),

ITM Power (AIM: ITM), the energy storage and clean fuel company, announces that the Company has been awarded a contract by The Department for Business, Energy and Industrial Strategy (BEIS), under its Net Zero Innovation Portfolio Low Carbon Hydrogen Supply 2 Competition, to accelerate the commercial deployment of ITM Power’s 5 MW Gigastack platform and its manufacture. The award for the Gigatest project is for £9.3m and follows initial designs developed through previous BEIS funding competitions.

As announced in the half year results in January, the testing programme for the 5 MW Gigastack platform includes both component level and full-scale evaluation.  Gigastack is 2.5 times larger than ITM Power’s previous state-of-the-art stack platform and it will undergo rigorous testing in representative conditions to validate the performance through real-world conditions, ensuring the technology is ready for large-scale commercialisation.  This 4th-generation stack has multiple competitive advantages including lower capital costs and a smaller system footprint.  These advantages will enhance the stack’s ability to operate under flexible conditions when coupled to renewable energy sources, producing green hydrogen at low cost.

Gigatest will also enable the deployment and validation of key manufacturing equipment at the existing Gigafactory and the second, more automated facility on which construction commences later this year.  This validation will contribute to the subsequent initiation of semi-automated mass-production of electrolyser stacks.

Graham Cooley, CEO, said: “The UK Government has put green hydrogen at the centre of its plans to achieve its legislated Net Zero targets.  This was underlined by the recent doubling of green hydrogen to 5 GW in the Energy Strategy published last month.  Awards under competitions like this will ensure that the UK remains a world leader in energy transition technology and manufacture, creating jobs, new supply chains and valuable high-tech exports.”

Greg Hands, Energy Minister at BEIS, added: “The UK is truly leading the world in hydrogen innovation thanks to the exciting efforts of companies like ITM Power.

“The government support which they have received today will help to boost the development of hydrogen as the clean, affordable, homegrown superfuel of the future.”

This funding has been made available from the Government’s £1 billion Net Zero Innovation Portfolio, which aims to support innovation in the supply of hydrogen. This competition looks to provide funding for projects that can help develop a wide range of innovative low-carbon hydrogen supply solutions.