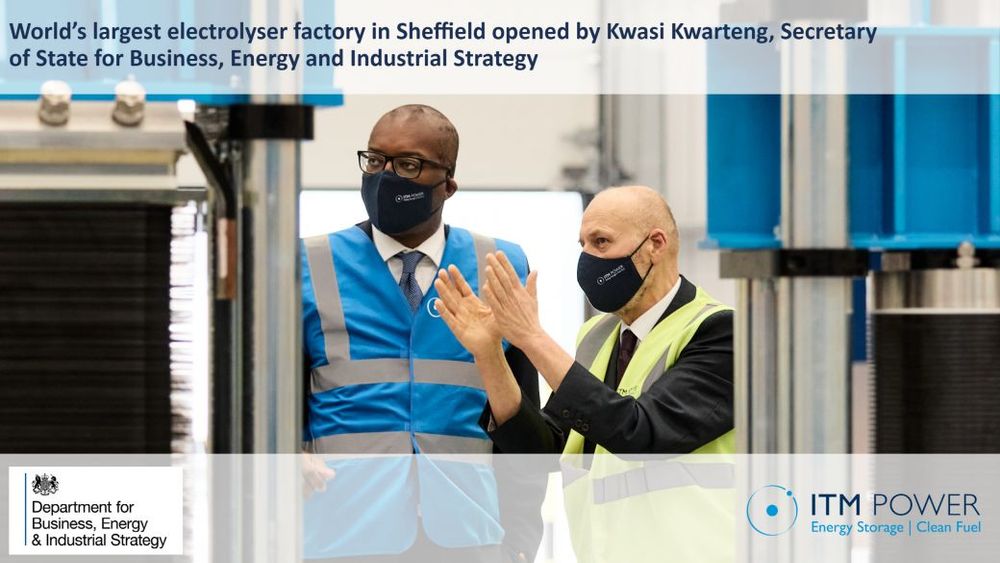 ITM Power (AIM: ITM), the energy storage and clean fuel company, is pleased to announce that the Rt Hon Kwasi Kwarteng, Secretary of State for Business, Energy and the Environment today launched the UK Government’s Hydrogen Strategy at an event to officially open ITM Power’s new factory at Bessemer Park in Sheffield.

ITM Power’s Gigafactory, with a capacity of 1,000MW (1GW) of electrolysis equipment per annum, commenced operation in January this year. The site already employs some 320 people with further staff additions planned as the facility ramps up to capacity. The Company manufactures electrolysers which split water into its constituent molecules of hydrogen and oxygen using renewable power. The resultant zero-carbon green hydrogen can then be used to decarbonise industrial processes, transport and heating and will play a major role in the world’s efforts to arrest climate change.

The announcement of the Government’s Hydrogen Strategy is available at UK government launches plan for a world-leading hydrogen economy - GOV.UK (www.gov.uk)

Business & Energy Secretary Kwasi Kwarteng said: “Hydrogen has the potential to provide a third of the UK’s energy in the future. Our first-ever Hydrogen Strategy sets out how we will back this technology, ramp up domestic production and create a new, British industry that will thrive over the next decade and beyond.

“ITM Power is at the forefront of manufacturing green hydrogen and its world-leading technologies are already playing an important role in cutting emissions as the UK moves away from fossil fuels, helping us meet our climate commitments, while creating thousands of high-quality jobs and unlocking billions-of-pounds of private investment.”

Graham Cooley, CEO of ITM Power, added: “We are delighted to have hosted Kwasi Kwarteng to launch the Government’s Hydrogen Strategy and to officially open the Bessemer Park Gigafactory. The Hydrogen Strategy will help British companies become world leaders in decarbonisation technology and equipment. ITM Power is already at the forefront globally of equipment manufacturing to make green hydrogen – the only zero carbon footprint energy gas.”

ITM Power plc manufactures integrated hydrogen energy solutions for grid balancing, energy storage and the production of renewable hydrogen for transport, renewable heat and chemicals. ITM Power plc was admitted to the AIM market of the London Stock Exchange in 2004. In October 2019, the Company announced the completion of a £58.8 million fundraising, including an investment by Linde of £38 million, together with the formation of a joint venture with Linde to focus on delivering renewable hydrogen to large-scale industrial projects worldwide. ITM Power signed a deal to deploy a 10MW electrolyser at Shell's Rhineland refinery. In November 2020, ITM Power completed a £172m fundraising, including a £30m investment by Snam, one of the world’s leading energy infrastructure operators. ITM Power operates from the world's largest electrolyser factory in Sheffield with a capacity of 1GW (1,000MW) per annum. ITM Power received an order for the world’s largest PEM electrolyser of 24MW from Linde in January 2021. Other customers and partners include Sumitomo, Ørsted, Phillips 66, Scottish Power, Siemens Gamesa, Cadent, Northern Gas Networks, Gasunie, RWE, Engie, GNVert, National Express, Toyota, Hyundai and Anglo American among others.