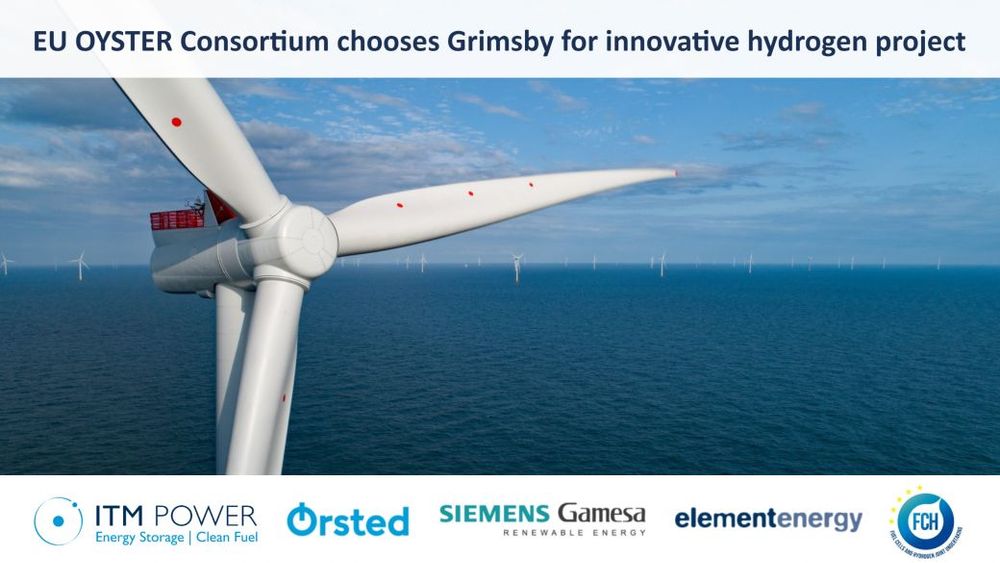 Grimsby has been chosen as the location for an innovative “marinised” electrolyser project for renewable hydrogen production.

Grimsby has been chosen as the location for an innovative “marinised” electrolyser project for renewable hydrogen production. The Fuel Cells and Hydrogen Joint Undertaking (FCH JU) funded OYSTER project will develop and demonstrate an electrolyser system designed to be integrated with offshore wind turbines. The project will also investigate the potential of using pipelines to transport hydrogen to shore. 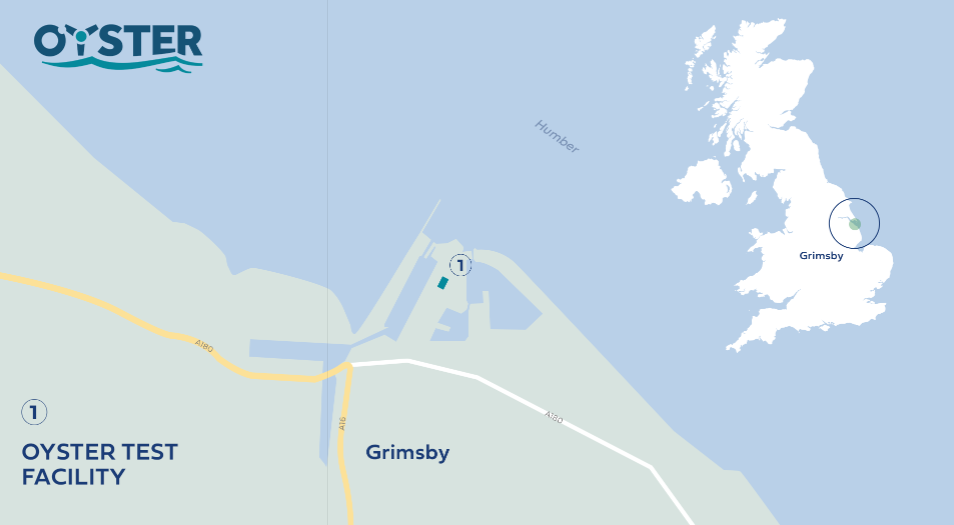 Renewable hydrogen is rapidly emerging as a key tool in the green transformation, providing a clear green path forward for many sectors that would otherwise be difficult to decarbonise, such as heavy industry and heavy transport. Developing offshore hydrogen production, by utilising electrolysers which only require water and renewable electricity to generate renewable hydrogen, further increase this potential by providing a means of transporting low-cost renewable energy from areas of excellent resource to demand centres.

Reaching the EU Hydrogen Strategy target of 40GW of electrolysers by 2030 is expected to require both onshore and offshore electrolysers. The OYSTER project - being undertaken by a consortium of ITM Power, Ørsted, Siemens Gamesa Renewable Energy, and Element Energy - will develop and test a megawatt-scale, fully marinised electrolyser in a shoreside pilot trial, which will be located in Grimsby. The project will also explore the feasibility and potential of combining an offshore wind turbine directly with an electrolyser and transporting renewable hydrogen to shore. The project is 100% funded by the FCH JU, a public private partnership of the European Commission, who awarded the project EUR 5 million in January 2021

The OYSTER consortium selected Grimsby because of the region’s strong connection to renewable energy, in particular offshore wind. Grimsby is home to the O&M hub for Ørsted’s UK East Coast operations, including Hornsea One and Hornsea Two, which will be the world’s largest offshore wind farm when completed in 2022. Both offshore wind farms use Siemens Gamesa turbines and are fitted with blades manufactured in Hull. The Humber is also home to Gigastack which is developing a blueprint for the deployment of industrial-scale renewable hydrogen from offshore wind. The Gigastack project is led by a separate consortium, consisting of ITM Power, Ørsted, Element Energy and Phillips 66 Limited.

Due to the high density of energy intensive industries such as refineries, power stations, steel works and glassworks that flank the banks of the Humber, the region is the UK’s largest industrial cluster by carbon dioxide emissions; 12.4MtCo2/yr. Decarbonisation of the Humber is vital for the UK’s legally binding net-zero 2050 target as well as the future economy of the Humber, and renewable hydrogen coupled with offshore wind could play a central role in achieving this ambition.

To realise the potential of offshore hydrogen production, there is a need for compact electrolysis systems that can withstand harsh offshore environments and have minimal maintenance requirements while still meeting cost and performance targets that will allow production of low-cost hydrogen. The OYSTER project will provide a major advance towards this aim.

Dr Graham Cooley, CEO of ITM Power, said: “Renewable hydrogen is the cleanest fuel available to us today. Utilising offshore wind energy, and generating renewable hydrogen using water in the process of electrolysis, offers a route to be able to decarbonise the entire energy system. ITM Power is delighted to be supporting this move towards a greener, cleaner future”

Michael Dolman, Partner at Element Energy, said: “Since supporting the formation of the OYSTER project, we’ve seen a growing number of projects planning offshore hydrogen production and increasing interest in this area from a wide range of stakeholders. With the selection of a location for the demonstrator, OYSTER is progressing well and will play a valuable role in advancing electrolysis technology for offshore applications.”

Bart Biebuyck, Executive Director, Fuel Cells and Hydrogen Joint Undertaking (FCH JU), said: “In order to meet the challenging EU Hydrogen Strategy target of 40GW renewables-fed electrolysers by 2030, off-shore wind parks will play an essential role. Depending on local conditions it may be optimal to move the electrolysers offshore and transport hydrogen rather than electricity to shore. The FCH JU is proud to support the OYSTER project as a stepping stone for off-shore electrolysers through the development of a fully “marinised” MW-scale electrolyser to be tested right next to the sea front and therefore contribute continuously to developing technologies for a climate-neutral future.”

About the OYSTER project and the FCH2-JU

This project has received funding from the Fuel Cells and Hydrogen 2 Joint Undertaking (FCH2-JU) under grant agreement No. 101006751. This Joint Undertaking receives support from the European Union’s Horizon 2020 research and innovation programme, Hydrogen Europe, and Hydrogen Europe Research. The FCH2-JU is a unique public-private partnership supporting research, technological development, and demonstration (RTD) activities in fuel cell and hydrogen energy technologies in Europe. Its aim is to accelerate the market introduction of these technologies, realising their potential as an instrument in achieving a carbon-clean energy system.

ITM Power plc manufactures integrated hydrogen energy solutions for grid balancing, energy storage and the production of renewable hydrogen for transport, renewable heat and chemicals. ITM Power plc was admitted to the AIM market of the London Stock Exchange in 2004. In October 2019, the Company announced the completion of a £58.8 million fundraising, including an investment by Linde of £38 million, together with the formation of a joint venture with Linde to focus on delivering renewable hydrogen to large-scale industrial projects worldwide. ITM Power signed a deal to deploy a 10MW electrolyser at Shell's Rhineland refinery.

In November 2020, ITM Power completed a £172m fundraising, including a £30m investment by Snam, one of the world’s leading energy infrastructure operators. ITM Power operates from the world's largest electrolyser factory in Sheffield with a capacity of 1GW (1,000MW) per annum. ITM Power received an order for the world’s largest PEM electrolyser of 24MW from Linde in January 2021. Other customers and partners include Sumitomo, Ørsted, Phillips 66, Scottish Power, Siemens Gamesa, Cadent, Northern Gas Networks, Gasunie, RWE, Engie, GNVert, National Express, Toyota, Hyundai and Anglo American among others.

The Ørsted vision is a world that runs entirely on green energy. Ørsted develops, constructs, and operates offshore and onshore wind farms, solar farms, energy storage facilities, and bioenergy plants, and provides energy products to its customers. Ørsted also has the ambition to become a global leader in renewable hydrogen and green fuels. The company ranks as the world's most sustainable energy company in Corporate Knights' 2021 index of the Global 100 most sustainable corporations in the world and is recognised on the CDP Climate Change A List as a global leader on climate action. Headquartered in Denmark, Ørsted employs 6,311 people. Ørsted's shares are listed on Nasdaq Copenhagen (Orsted). In 2020, the group's revenue was DKK 52.6 billion (EUR 7.1 billion). Visit orsted.com or follow us on Facebook, LinkedIn, Instagram, and Twitter

Siemens Gamesa is a global leader in the wind power industry, with a strong presence in all facets of the business: offshore, onshore and services. The company’s advanced digital capabilities enable it to offer one of the broadest product portfolios in the sector as well as industry-leading service solutions, helping to make clean energy more affordable and reliable. With more than 107 GW installed worldwide, Siemens Gamesa manufactures, installs and maintains wind turbines, both onshore and offshore. The company’s orders backlog stands at €30.2 billion. The company is headquartered in Spain and listed on the Spanish stock exchange (trading on the Ibex-35 index).

Element Energy is a dynamic and growing zero carbon energy consultancy. We specialise in the intelligent analysis of zero carbon energy and help our clients understand zero carbon technology options and develop innovative projects using these technologies. Element Energy is involved in many of the largest hydrogen deployment projects across Europe. These include a number of projects based around large scale renewable hydrogen production and associated end uses in the transport and industrial sectors.

Element Energy was recently acquired by ERM, a global sustainability consultancy practice with over 5,500 employees in 40 countries. ERM is the world’s largest pure-play sustainability advisory firm, a specialist energy consultancy that works with organizations to implement integrated low-carbon technology solutions that help solve their net-zero and decarbonization challenges.