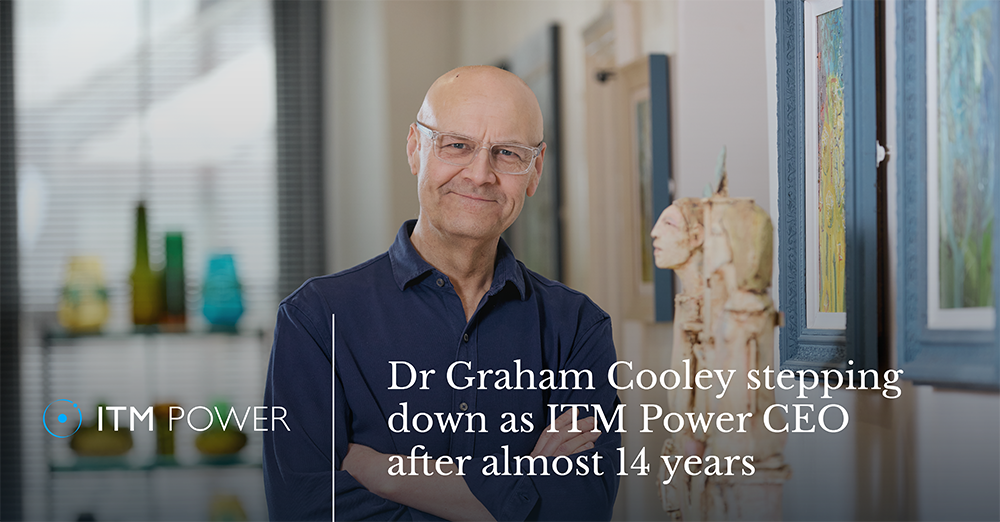 Dr Graham Cooley steps aside as CEO of ITM Power after thirteen and a half years at the helm, and will remain with the company in a senior strategic role.

After thirteen and a half years as CEO of ITM Power, Dr Graham Cooley is changing roles. As the company looks to expand its international presence, a new CEO is being sought with the skillset and experience required to take ITM Power through its next evolutionary stage.

“I have decided to step aside as CEO of ITM Power. Once a new CEO is welcomed into the company, I will adopt a new strategic role in ITM Power, reporting to the Chairman and the new CEO,” said Graham.

“I recognise that the skills now required to take the company forward are those of a world-class manufacturing professional who has expanded a manufacturing organisation internationally.

“I very much look forward to finding that individual, introducing them to ITM Power, and working closely with them as we go forward, while remaining a significant and supportive shareholder.”

Graham joined the company in 2009 following a career in the power and technology sectors where he developed a number of novel technologies and oversaw multi-million-pound fundraising rounds.

As CEO of ITM Power, he has broken the company into new markets – including Japan and North America – forged ground-breaking industrial partnerships, and overseen equity fundraisers of almost £500 million. The company has rapidly evolved and, in 2021, opened the world’s largest electrolyser manufacturing facility.

On his replacement, Graham said: “We’ll find a very significant individual that has already been through the journey that ITM Power will be going through to internationalise its manufacturing business. An important process for us, and one that I will be fully engaged with and supportive of.

“We are working with a very well-known and major recruitment firm to find the right individual. We elected to make the announcement as early as possible and make the process visible to the market, in order to help the process of finding the calibre of candidate that we are seeking.”