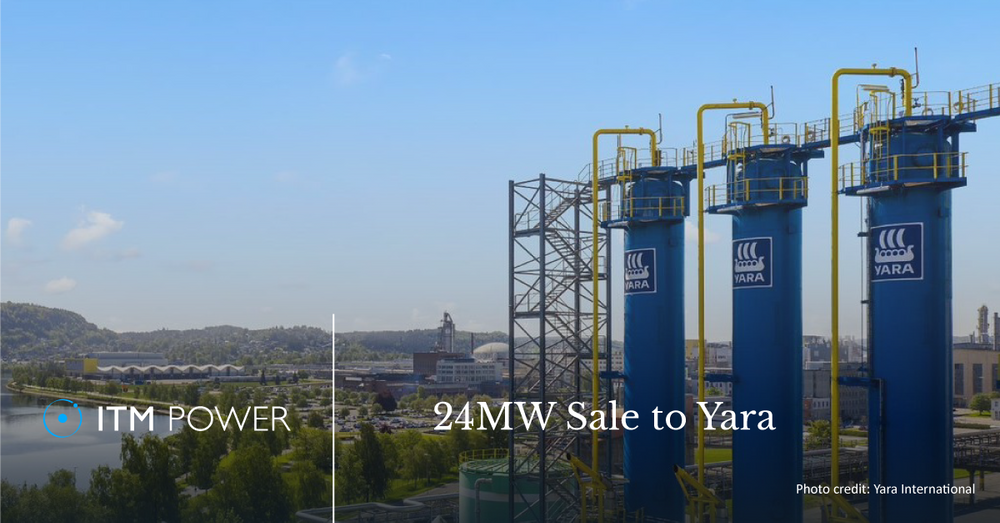 ITM Power (AIM: ITM), is pleased to provide details of the sale of a 24MW electrolyser to Linde Engineering.

**ITM Power PLC** (“ITM Power” or the “Company”) **24 MW Sale for Ammonia Production** ITM Power (AIM: ITM), the energy storage and clean fuel company, is pleased to provide details of the sale of a 24MW electrolyser to Linde Engineering contained in the Company’s Half Year Report issued yesterday. The electrolyser is to be installed at a site operated by Yara Norge AS (“Yara”) located at Herøya outside Porsgrunn, about 140 km southwest of Oslo. The site covers an area of approximately 1.5 square kilometres and is the largest industrial site in Norway. The Porsgrunn site produces 3 million tons of fertiliser per year. The hydrogen required for ammonia production is currently produced from SMR. Yara intends to start replacing this grey hydrogen with green hydrogen produced from renewable energy and electrolysis. The 24MW system supplying 10,368 kg/day of hydrogen will account for approximately 5% of the plant's consumption and serve as a feasibility study for future upscaling. Yara has received a grant of up to NOK 283m (£23.6m,pending ESA approval) from Enova SF, a Government funding body, to invest in green solutions for hydrogen used for industrial purposes in Norway. The electrolyser equipment is due to be ready for shipment from ITM Power in Q4 2022 with revenue realised in the Company’s 2022/2023 financial year. The Porsgrunn plant is one of Norway's largest sources of CO2 emissions outside the oil and gas industry, emitting around 800,000 tonnes per year. The electrolysis plant will be powered by renewable energy and provide enough hydrogen to produce 20,500 tonnes of ammonia per year which can be converted to between 60,000 and 80,000 tonnes of green fertiliser. This will reduce the plant's CO2 emissions by approximately 41,000 tonnes. The site is expected to supply its first green ammonia-based products in mid-2023.

**Dr Graham Cooley, CEO of ITM Power, said:** “Decarbonisation of industry is critical to achieving the commitments of countries to reduce greenhouse gas emissions. Globally, the largest use today of hydrogen produced from hydrocarbons is in the production of ammonia for fertilisers. This use has to be curtailed and eventually eliminated. We are very pleased to be working with forward-thinking producers such as Yara and the Norwegian Government to address this issue.” **John van der Velden, Senior Vice President Global Sales & Technology, Linde Engineering, added:** “This project showcases Linde Engineering’s market leadership in electrolysis projects. Given the growing demand from the fertilizer industry for green hydrogen, this plant is a step towards further upscaling and increasing the size of these projects worldwide.” **Magnus Ankarstrand, President of Yara Clean Ammonia, said:** “The project aims to supply the first green ammonia products to the market as early as mid-2023, both as fossil free fertilizers, as well as emission free fuel for ships. Green ammonia is the key to reducing emissions from world food production and long-distance shipping. With this project, we move from intention to actions together with Linde Engineering and local contractors.”

**About ITM Power PLC:** ITM Power manufactures integrated hydrogen energy solutions for grid balancing, energy storage and the production of renewable hydrogen for transport, renewable heat and chemicals. ITM Power PLC was admitted to the AIM market of the London Stock Exchange in 2004. In October 2019, the Company announced the completion of a £58.8m fundraising, including an investment by Linde of £38m, together with the formation of a joint venture to deliver renewable hydrogen to large-scale industrial projects worldwide. In November 2020, ITM Power completed a £172m fundraising, including a £30m investment by Snam, one of the world's leading energy infrastructure operators. In January 2021, the Company received an order for the world's then largest PEM electrolyser of 24MW from Linde. In October 2021, the Company, with Linde, announced the deployment of a 100MW electrolyser at Shell's Rhineland refinery, following the start-up of an initial 10MW facility at the site. In November 2021, ITM Power raised £250m to accelerate expansion. ITM Power operates from the world's largest electrolyser factory in Sheffield with a capacity of 1GW (1,000MW) per annum, with the announced intention to build a second UK Gigafactory in Sheffield with a capacity of 1.5GW expected to be fully operational by the end of 2023. The Group's first international facility, expected to have a capacity of 2.5GW per annum, is intended to be operational by the end of 2024, bringing total Group capacity to 5GW per annum. Customers and partners include Sumitomo, Ørsted, Phillips 66, Scottish Power, Siemens Gamesa, Cadent, Northern Gas Networks, Gasunie, RWE, Engie, GNVert, National Express, Toyota, Hyundai and Anglo American among others.

**About Yara** Yara is the world's leading supplier of mineral fertiliser and has a market share of approx. 8%. Together with Yara Sluiskil in the Netherlands, Yara Porsgrunn is the biggest of Yara International's production units. The production of fertiliser at the Porsgrunn works helps satisfy the nutritional needs of more than 35 million people. The company's products are delivered all over the world, the biggest market being Asia, which buys over 25% of NPK (complex fertiliser) capacity each year. Yara Porsgrunn consists of several factory units: a modern ammonia factory with a capacity of 530,000 tonnesper year, three nitric acid factories with a capacity of 1.3mt acid per year, two modern complete fertiliser (NPK) factories with a total capacity of about 2.0mt NPK per year and a calcium nitrate factory with a capacity of about 1mt per year. Yara Porsgrunn has about 450 employees and is the biggest production unit in Herøya Industrial Park. Yara Porsgrunn also has plants which provide food producing and industrial companies with carbon dioxide (CO2), argon gas, nitrogen gas, oxygen gas, liquid fertiliser and odour control solutions -ends-