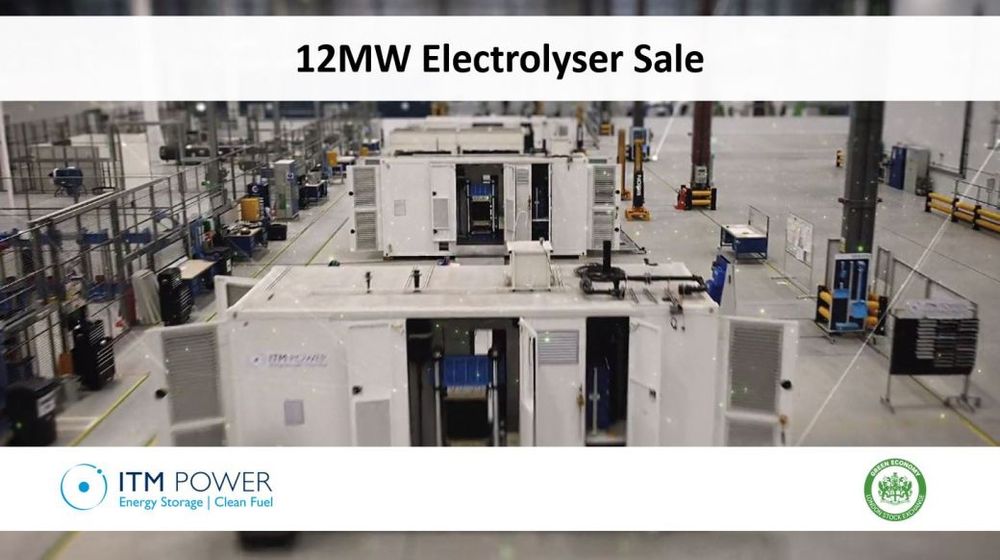 15 November 2021 ITM Power plc (“ITM”, "ITM Power", the “Group" or the "Company") 12MW Electrolyser Sale ITM Power (AIM: ITM), the energy storage and clean fuel company, is pleased to announce that it has signed a contract for delivery of 12MW of electrolysis equipment to be deployed in 2022, and recognised in the 2022/23 financial year.

ITM Power (AIM: ITM), the energy storage and clean fuel company, is pleased to announce that it has signed a contract for delivery of 12MW of electrolysis equipment to be deployed in 2022, and recognised in the 2022/23 financial year. The customer and location remain confidential due to commercial sensitivities. This project was already included within the contracts backlog (in negotiation) and now moves into work in progress.

ITM manufactures integrated hydrogen energy solutions for grid balancing, energy storage and the production of renewable hydrogen for transport, renewable heat and chemicals. ITM Power plc was admitted to the AIM market of the London Stock Exchange in 2004. In October 2019, the Company announced the completion of a £58.8m fundraising, including an investment by Linde of £38m, together with the formation of a joint venture to deliver renewable hydrogen to large-scale industrial projects worldwide. In November 2020, ITM Power completed a £172m fundraising, including a £30m investment by Snam, one of the world’s leading energy infrastructure operators. in January 2021, the Company received an order for the world’s then largest PEM electrolyser of 24MW from Linde. In October 2021, the Company, with Linde, announced the deployment of a 100MW electrolyser at Shell's Rhineland refinery, following the start-up of an initial 10MW facility at the site.

ITM Power operates from the world's largest electrolyser factory in Sheffield with a capacity of 1GW (1,000MW) per annum, with the announced intention to build a second UK Gigafactory in Sheffield with a capacity of 1.5GW expected to be fully operational by the end of 2023. The Group’s first international facility, expected to have a capacity of 2.5GW per annum, is intended to be operational by the end of 2024, bringing total Group capacity to 5GW per annum. Customers and partners include Sumitomo, Ørsted, Phillips 66, Scottish Power, Siemens Gamesa, Cadent, Northern Gas Networks, Gasunie, RWE, Engie, GNVert, National Express, Toyota, Hyundai and Anglo American among others.